August 27, 2017
Now I am finally in Ambato, with my host family. But I will start at the beginnig. Tuesday afternoon.

Tuesday, 22nd August:
A friend stayed over in the night and in the afternoon we were going to berlin to meet two other friends: Sarah and Tamiah (love ya guys) cause the one just arrived from Namibia (she live there and was an exchange student in my school).
For me it was really hard to say goodby to my house, I have no idea why it was just so sad. When we arrived in Berlin and we meet my friends my wallet was stolen.. and with it my money card for Ecuador... I was so angry and was like WHY?
After it we had a great time together and and I spend the night in Berlin, cause my flight goes at 6 am in ther morning.
My Dad, his girlfriend, my brother, my friend, my uncle, my aunt and my cousin spend the eve together and it was so nice and a good way to say goodbye to everyone.

Wednesday, 23rd August:
The alarm goes at 3 am, breakfast at 3:30 and the car at 3:50. We arived at the airport 15 mins later.
I had to chek-in oline and I did it together with two other exchange stundents from Germany, cause we all wore the YFU shirt and so we could see whos from YFU too.
Having to say gooodbye wasn't that easy, not for me, not for my family, but we had to so yeah.

Having to say goodbye isn't fair - but then again, life isn't fair.
~Tamiah

So the flight goes at 6 am and we flight to Amsterdam. During the flight I read my "Goodbye Book" and I want to thank everyone who wrote something in it. It's so nice and good to hear that from you guys (I love you all <3).
When we arrived in Amsterdam we had something like 2 hours till ne next flight goes and so we walked around. At the gate we met other exchange student from Europe (Sweden, Danemark, Hungary, Estonia, France and Switzerland) and from Germany we were 15 stundents.
During the flight I watched four movies (Fast 8, The Beauty and the Beast, Gurdians of the Galaxy 2 and fantastic Beats and where to find them) but I didn't sleept at all (xD) in 11h. We arrived at 2pm Ecuadrorian time.
Quito is so beautiful and soo big. We were catched up by some Guys from YFU-Ecuador and brought into a kind of curch or something like that. It was rally nice. At this day were all so freaking tired and so we just ate some dinner and go to sleep.

Thursday and Friday, 24th and 25 August:
At the Orientaion we talked about the culture, about diffrents between Ecuador and that where we used to live. It was really interesting and I had much fun with the other exchange stundents, there were some from the US too and it was really interesting to talk to them about everyting..
It was like a "safe space", no one of us really realized that we were going to live in this country for a year, u know?
At Friday afternoon/eve/night we had to say goodbye from each other. That was really sad too.. Some of us had to wake up at 3am and so we didn't see us agian.
I had a really good time.

Saturday, 26th August:
I woke up at 6 am and so I had the oppurunity to say goodbye to some of them.
The group to Ambato started at 8am and the ride was os beautiful and interesting, cause we drove through the highlands. I was sooooo tired but i couln't sleep..
We arived in Ambato at 11am and we droved to the house of our "local rap" from YFU and our Hostfamilies picked us up there. My was the latest one xD, I was so nervous and excited.
When they finally arrived it was so awesome, theye're so nice and friendly. They drived me to their/my house and I stardet to unpack my stuff into my room.
Later that day we going out to eat something and it was really good and diffrent at the same time. The cousin of my host sister was with us too and when we were back home I fall asleep for like 3 hours.
After the power nap we watched some Grey's Anatomy <3 and we go to a friend house and ate some pizza and watched a movie.

Sunday, 27th August:
My first night in my new bed was really good and really comfortable
We ate "desayuno" together and it was really cool and I like them a lot. I really try to speak espanol and when I don't understand a word then I aks my host sister. After desayuo and a little break we going to the house of my otra hermana invitada y su hijo. We were in the city together and tooked something to eat, by the way it was really really good. After taht we was in the Mall of Ambato and brought someting for the next weeks.

And yeah thats it. My first days in Ecuador.

My 1st time out alone

November 23, 2017
Wednesday, November 22nd  So today was the day... I was out with some other exchangers for the first tme without my host-sister by my side. I know this maybe sounds not as such a big deal but for me it was. Because first my fmily was like: "No puedes salir sin Cielo es peligroso!" What means "You can't go out without Cielo it's dangerous" and I really understand why they were saying this, i mean I don't really speak Spanish and also I just look like a Gringa (someone from the US or an other country) and everyboday is always staring at me and all the cars honk after me. But anyway in Germany my dad was more calm about that and so here I had a little bit the feeling that I am not as "free" I want to be. I mean I didn't even wanted to go out often but still just the knowlege that I always need to go with Cielo but with that I DON'T say that I don't like to go somewhere with Cielo. So to every exchange student out there who maybe
read more » 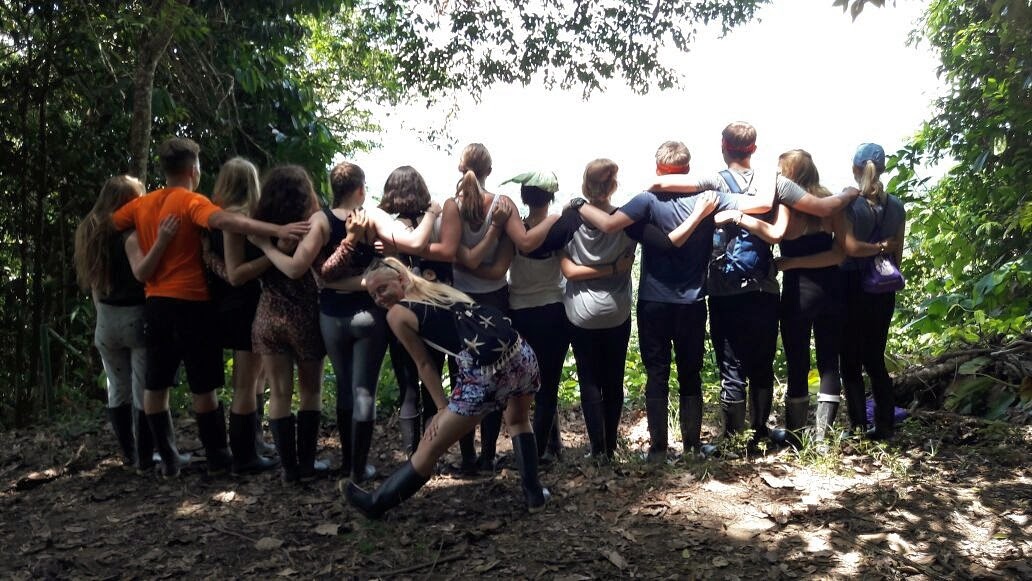 During the orientation back in Germany they alwasy told me that I won't just got a new family with my Host Family but also with the other exchangers. To be honest I couldn't believe that because we won't see each other so often and they are strangers for me who didn't even speack German. In total we're 25 teenager who are studying here in Ecuador: 16 are German, 3 from Estonia, 2 are from the US, and the rest are from Danemark, Finland, Switzerland, Sewden, France and Hungary. In the past days 14 of us were in the Amazonian Rainforest (clic here for a video about the trip) but this post is not about my experiences in the rainforest it's about how strangers become family . They are my family. I know them for 2 months know but from face to face we just saw each other for something like 10 days. And eve in that short time I have the feeling to know them for years and that we're friends for yearsbut we aren't. In the last days I realized how importa
read more »